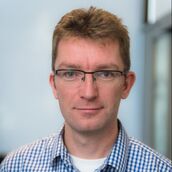 David Scott, PhD
David received his PhD in Organic Chemistry from the University of Oxford, followed by post-doctoral research at UT Austin. He spent ten years as a medicinal chemist in AstraZeneca's Oncology group, where he helped advance small molecule drug discovery projects towards the clinic. Dr Scott joined the core in 2014. 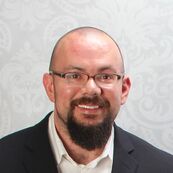 John Hatcher, PhD
John received his PhD in Organic Chemistry from Duke University in 2011, and then worked as a post-doc in Nathanael Gray's lab, developing small molecule kinase inhibitors. He continues in the core as a lead scientist, working on kinase and cysteine protease inhibitors, and different approaches to targeted protein degradation.

Thomas Gero
Tom joined the core in 2015 with over 20 years of industry experience in synthetic and medicinal chemistry. This includes over 15 years with AstraZeneca, where he worked on a diverse set of oncology targets and contributed to the delivery of several clinical candidates.
Frederic Feru
Fred joined the core in 2016 with over 25 years of process and discovery chemistry in both France and the US, including 10 years with Pfizer. He has experience in a variety of therapeutic areas including oncology, inflammation and cardiovascular disease.
Prasanna Sreevatsan
Prasanna joined the core in 2018 after completing a Masters in organic chemistry at U Penn.
HOME | SERVICES | PEOPLE | RESOURCES | CONTACT US
©2015 Medicinal Chemistry Core at Dana-Farber Cancer Institute